Tips to Choose the Best-Matching Blockchain for Your dApp Development

Despite the recent downward trend some people are calling ‘crypto winter,’ such words as ‘decentralized app’ and ‘Blockchain’ are being mentioned more and more often to describe the Web3-based tech world of tomorrow. As a custom software development company running a top-notch team for dApp development, we at Andersen are closely monitoring all the most important trends and developments. According to DappRadar, in 2021, the amount of daily active wallets connected to decentralized apps hosted by one of the 30 popular Blockchain networks they were tracking, hit 2.7 million. The number of connections was 592% more than in 2020. Therefore, it is time to elaborate, with dApp development company Andersen, on what dApps are all about, and why they are attracting more and more people.

What is a decentralized app or, alternatively, dApp?

Centralized apps are owned and managed by a single company. As such, they run off a single server or, alternatively, server clusters. In practice, when someone downloads a copy of an app, it must send and receive data from its server to function. If the server experiences tech issues and crashes, the app ceases to function until the issue is resolved.

Decentralized apps, on the other hand, run on a Blockchain network. Instead of downloading an app, the end-user pays a developer a given amount of crypto assets to download a ‘smart contract.’ Basically, this contract is nothing more than just source code. That code, in turn, creates an entirely fresh copy of the app on the end-user’s device. That is how a new block is generated.

In a nutshell, dApps are run on P2P Blockchain networks, instead of centralized servers.

As for the types of dApps, the following classifications can be made.

First, by their basis: 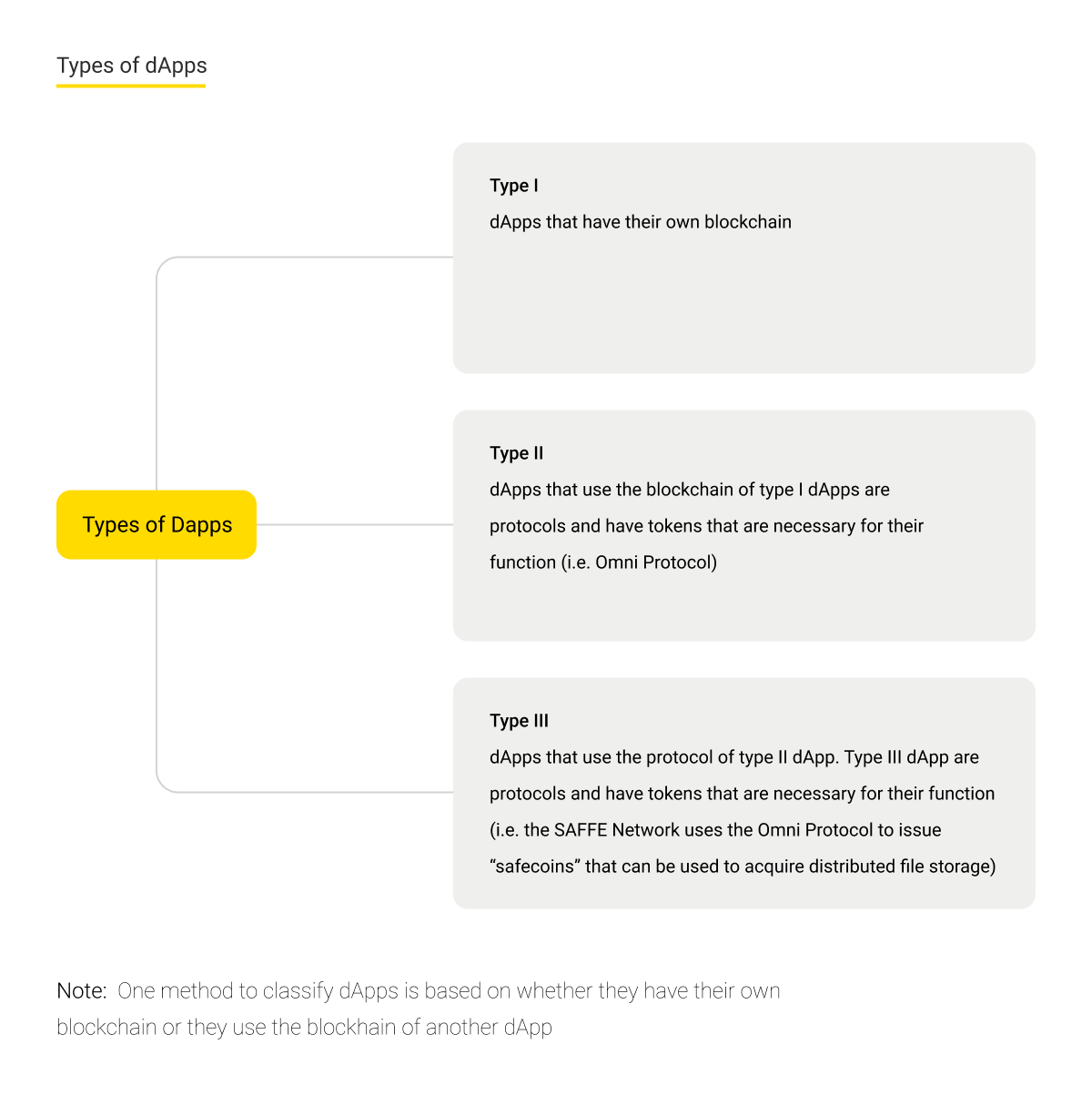 Second, by their domains and purpose. For instance, State of the dApps says there are currently as many as 4,073 dApps in existence (some of them are not in use and are not being improved, but still, they technically exist). According to them, the most popular classes in the dApp development domain include, in terms of daily transactions:

Hence, one can summarize the advantages offered by dApps this way:

In addition, transactions between dApp users are enabled by smart contracts, which is an obvious advantage.

While assessing the pros and cons of various Blockchains for dApp development, the first step taken by most dApp development companies would be to examine their rivals and peers. The industry landscape, according to State of the dApps, looks as follows:

How to choose a Blockchain for dApp development

Not so long ago, Vitalik Buterin, the father of ETH, put forward the so-called ‘Blockchain trilemma.’ Namely, a dApp development team has to prioritize one of the following three dimensions:

In addition, many teams also assess such factors as existing Blockchain communities, speed, and funding prospects. However, the aforementioned dimensions are the crucial ones. What you choose to prioritize depends on your goals. Below, we will cite some facts about the top four Blockchains for dApp development companies.

As you have already seen, Ethereum is an industry standard for dApp development, both popular and widely known. At the same time, it is still not an answer to the Blockchain trilemma. It is decentralized, not 100% secure, and slow. Its advantages are:

EOS is secure and extremely fast. Its advantages are:

The Binance chain is centralized; however, it offers an amazing transaction speed. As for security, opinions differ. It is secure, but still, there are sceptics stating that its centralization is a matter of concern. Its advantages are:

TRON is viewed by the crypto community as a centralized asset, since the community exercises little influence on blocks and transactions. On the other hand, it is incredibly fast and almost invincible. Its advantages are:

Selecting the optimal Blockchain basis for your dApp development initiative is an important prerequisite for your eventual results. It is only you who knows the ideal balance between security, scalability, decentralization, community size, etc. for your unique purposes. If you find it hard to make the ultimate decision, contact Andersen, one of most reliable dApp development companies available in the Web3 market. Our Blockchain experts will help you pick the right option and engineer your decentralized apps. Contact us to launch a discussion!